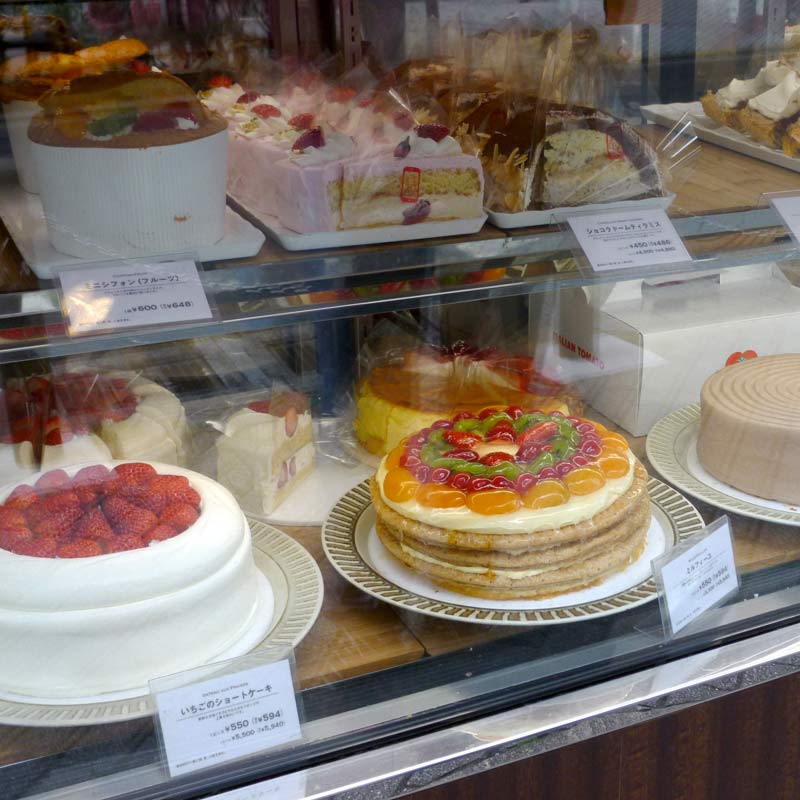 If you have ever eaten cake in Japan you will know how extraordinarily delicious they are, so much so that it’s difficult to describe to someone who hasn’t experienced it!

Whether you are dining at a fashionable Ginza café or grabbed a slice of roll cake from Lawson, the presentation, texture and taste will be gorgeous.

I guess it’s possible that you may have eaten a so-so cake in Japan but that’s not my experience and I think many others will agree that commercially prepared desserts in Japan are a real treat.  They look perfect with beautiful colours, frosting and decoration and will taste every bit as good as they look.

Cream fillings usually have a mousse-like fluffy consistency, frostings use fresh, sweetened whipped cream and sponges are light and delicate.  They are never sickly or overly sweet and in fact tend to use less sugar than Western desserts making them easy to eat, even after a meal.

So what’s the difference?

Japanese sponge uses a method where the egg whites are whipped, almost to a meringue texture before being folded into the other ingredients. 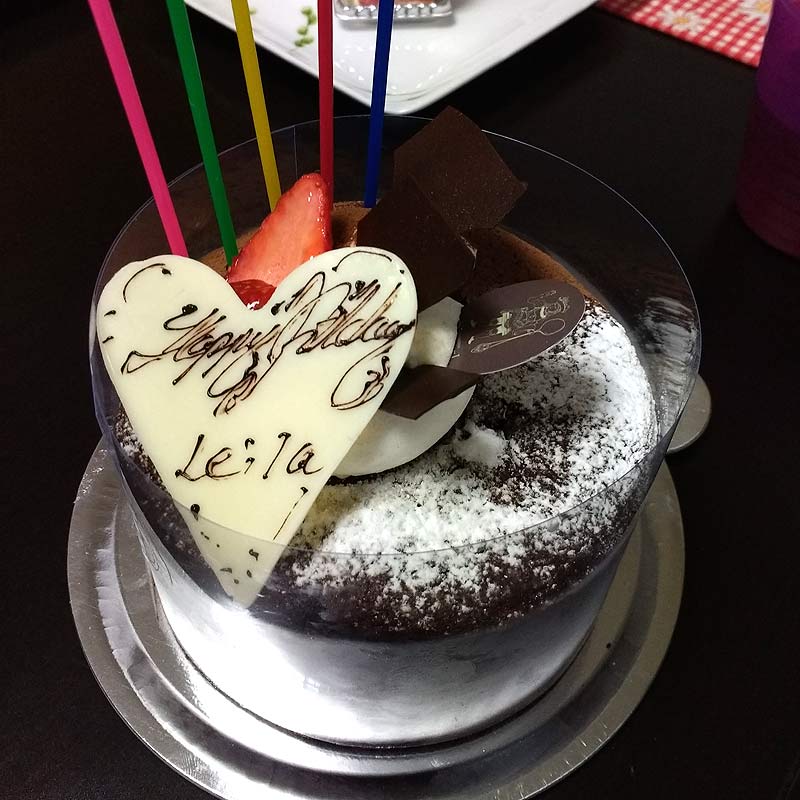 This adds air to the cake and often there are no other raising agents such as baking powder.  They use very fine ‘soft’ flour with low gluten to make the sponge very light and fluffy.

This is quite a difficult technique to perfect at home as it requires a lot of beating to make the eggs fluffy and the knowledge to know when it’s just right.  This recipe https://www.justonecookbook.com/castella/ shows I think just how difficult it can be to achieve a good result at home.

Even for frosting (it’s difficult to call it ‘icing’ as it’s not really equivalent to Royal Icing or even our butter cream icing) whipped egg white is used to get a fluffy, mousse-like consistency.  But more often than not, fresh sweetened whipped cream is used and made even better with fresh fruit such as strawberries, kiwi and peach. 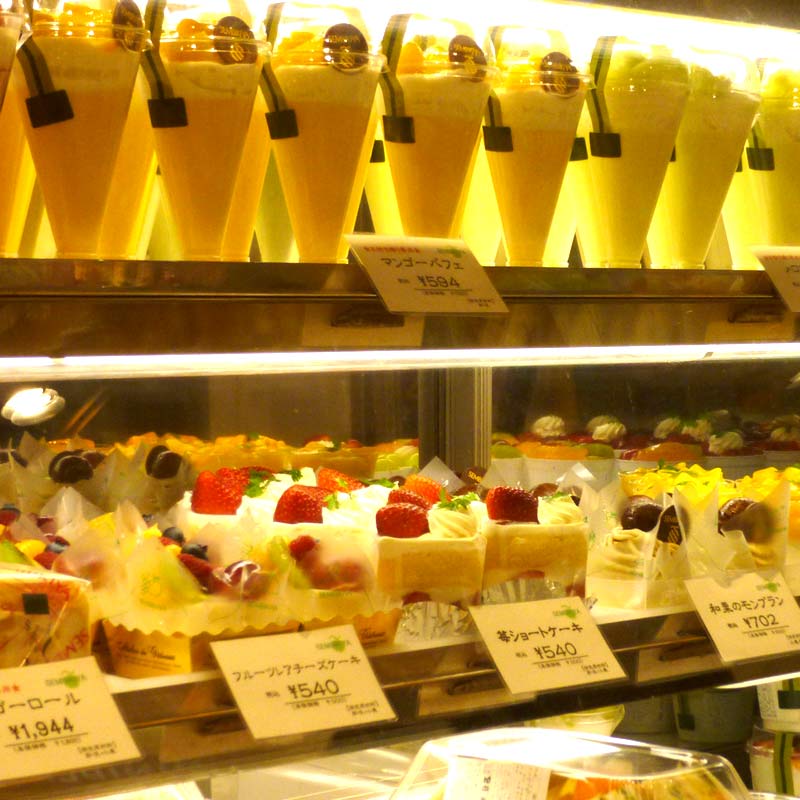 Presentation is an important part of the dessert experience and when you walk past a patisserie or café, the cakes on display will look so tempting it’s hard not to stop and marvel at the colours and almost unreal perfection.  They’re definitely Instagram worthy and many people post pictures of the shop displays.

But it’s not only the outside of the cake that gets all the attention!  Often the cross-section, where the cake is cut into slices, also has a gorgeous design, showing slices of fruit or different colours of frosting.  This has become a bit of an art and many bakers have made it their goal to achieve an intricate and beautiful cross-section design.

Of course, most of these sweet desserts are not really following any Japanese tradition but are based on Western style cakes and desserts. 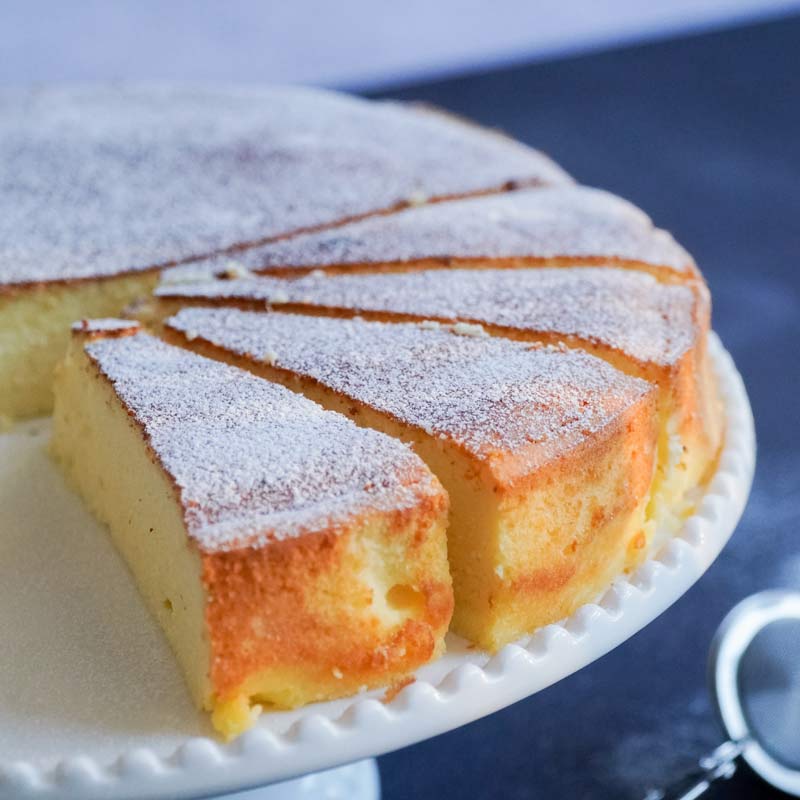 However, when the Japanese have copied these recipes, they have honed and perfected them and the result is often a supreme, unique version of what we might recognise in the West.

A good example is cheesecake.  A cheesecake in Europe or the US is often quite a heavy dessert, whether baked or just a chilled concoction of cream cheese or mascarpone.  However cheesecake in Japan, sometimes referred to as cotton cheesecake, is light and fluffy, not too sweet and once you’ve tried it the Western version will never seem quite the same.

Other examples may be the Castella and Baumkuchen sponge cakes which have obvious European roots but have become so common in Japan that you forget they are not of Japanese origin. 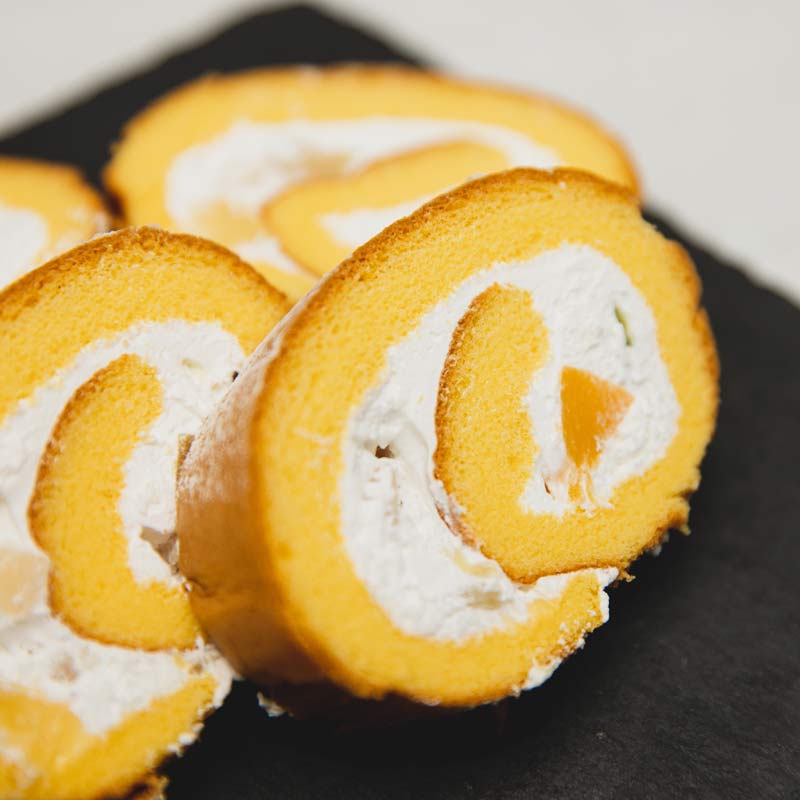 Roll cake is another Western style cake that has become so ubiquitous and uniquely Japanese that it deserves its own mention.  It is a popular dessert in Japan and is similar to what we in the UK would call Swiss Roll.

You can find it in a lot of patisseries, bakeries and department store food courts but I think the most famous come from convenience stores such as Lawson, FamilyMart and Seven-eleven.

But if you go into a shop expecting to find a spiral of cheap sponge with a jam or synthetic cream filling, you’re in for a real surprise.

Roll cake in Japan consists of light fluffy sponge (as already described) wrapped around a scrumptious filling.  Often this is fresh whipped cream and fruit, a vanilla custard, chocolate cream or custard filling or maybe a matcha cream filling.  All will be light and delicious and a perfect way to round off your meal.

In the UK and US, although there are exceptions especially when it comes to some fancy restaurants, set foods such as milk pudding or blancmange are seen as quite old fashioned.  To most people fruit jelly has become an ordinary, cheap dessert usually reserved for kids parties - not something you would find in a café or serve to guests. 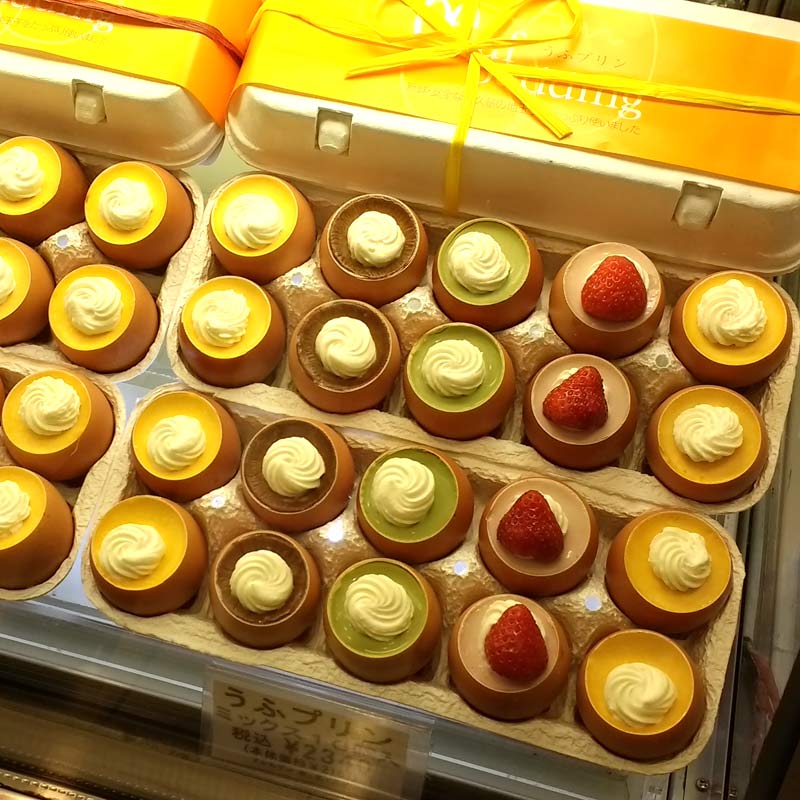 However in Japan using setting agents in both savoury and sweet foods is a part of traditional Japanese cuisine and it’s common to be served a course that has a set or jellied consistency.  Jelly, both sweet and savoury, is popular and people appreciate the soft texture, thinking of it as ‘comfort food’.

So to us Westerners, although the savoury foods such as grey konnyaku or the steamed egg custard known as chawanmushi (delicious by the way) may seem unfamiliar, there are plenty of lovely fruit based or other sweet jelly desserts which, as you would expect, look as beautiful as they taste.

In the summer, coffee jelly is popular as a refreshing dessert and water cake or raindrop cake, a colourless completely clear jelly with a subtle flavour, has become trendy.

As a bonus, it should be noted that jellies and set desserts in Japan are usually made with agar agar or some other plant-based setting agent (often derived from seaweed or root vegetables) rather than gelatine and so are vegan friendly.

Ice cream is popular in Japan and, just like in the West, you can find ice cream parlours, stands and kiosks in any shopping centre or mall. 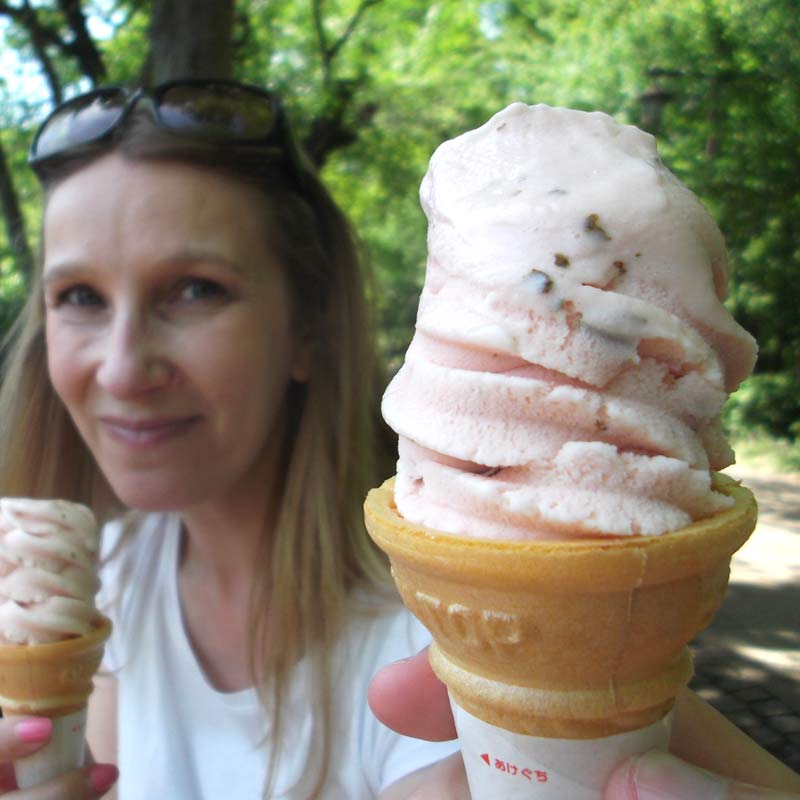 There is always a great range of delicious flavours, some of which seem particularly Japanese such as matcha (green powdered tea), sakura (cherry blossom), peach and sesame but you might also be entertained by some of the more unusual flavours such as cream cheese, miso, wasabi and red bean!

When you are in Japan, it’s impossible not to notice the delicious desserts and you would have to have great willpower not to give in and try them.  But please do try some that you might not ordinarily go for – you may be surprised by even a plain looking sponge, simple ice cream cone or regular fruit jelly from the convenience store! 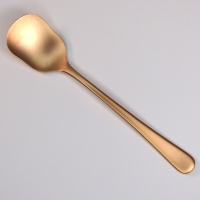 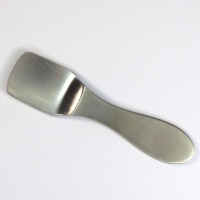 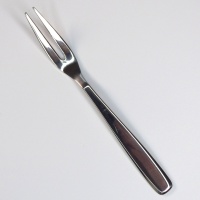 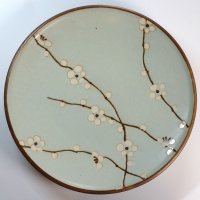 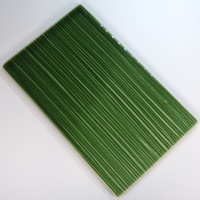 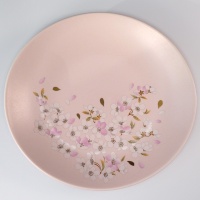