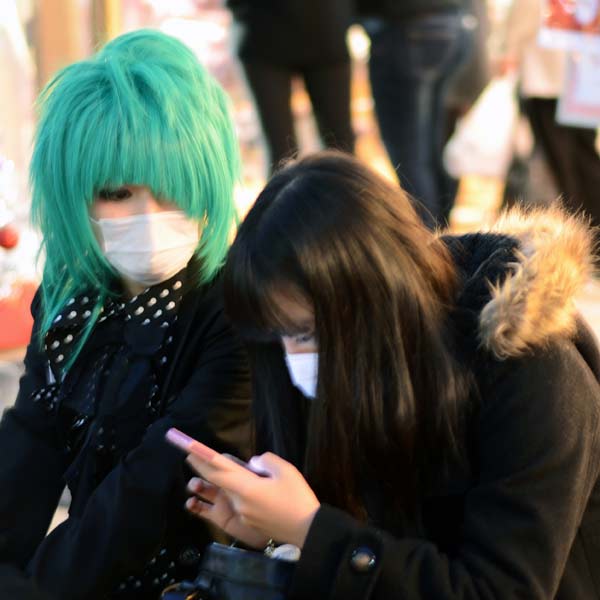 What do you think about the idea of wearing a face mask to prevent illness or even as a fashion accessory?

I have heard of Japanese people being treated suspiciously in the UK because they were wearing masks, with people thinking it meant they were carrying some awful disease!

When you go to Japan, it’s surprising at first but you soon become accustomed to seeing people going about their daily business wearing a face mask.  As westerners, our first reaction is that there must some contagion going around!  But to the Japanese, and I think to people from other Asian countries, it’s perfectly normal and there are a variety of reasons why a person might choose to wear a mask in public.

Of course the main reason is because of illness.  Nothing exotic, mind you, just normal things like ‘flu or coughs and colds.  And not only to prevent catching something; if you are ill, it’s considered polite to wear a mask to minimise spreading your germs to others.  Some masks come impregnated with menthol and fragrances such as lavender or jasmine so you might actually feel more comfortable wearing one.

The idea of wearing a mask to prevent getting ill can be desirable too, especially as many people live in crowded towns and cities and use public transport on a daily basis.  My friend wore one when she went out while she was pregnant because she really didn’t want to pick up a cold (of course, other hygiene rules like washing your hands are also important!).

The other main reason Japanese people wear masks is because they suffer from hay fever.  Japan has many pine trees and other conifers which at certain times of the year give off great clouds of pollen!  A concern about pollution is a similar reason since the mask helps to stop you breathing in the tiny particles that may cause you health problems.

Apart from health issues, there are also a few typically quirky reasons why a Japanese person might don a face mask.  Some people, mainly women I’m guessing, think they are attractive and like the way they look.  You can buy masks with cute designs or featuring manga characters so that it won’t look out of place with your carefully curated street style.

Lately I have heard of Japanese women chucking on a mask when they need to dash out and can’t be bothered or don’t have time to put any make up on.  As someone who rarely goes out without at least a bit of powder and mascara, I think I can relate to that!

I have to say, the more I have visited Japan and the more normal it seems to wear a face mask I do wish it was something we would adopt in the UK.  I have never bought them before but I think I will on my next trip; I would like to try the scented ones for when I have a cold.  Not sure if I’m brave enough to wear it to the supermarket yet though!